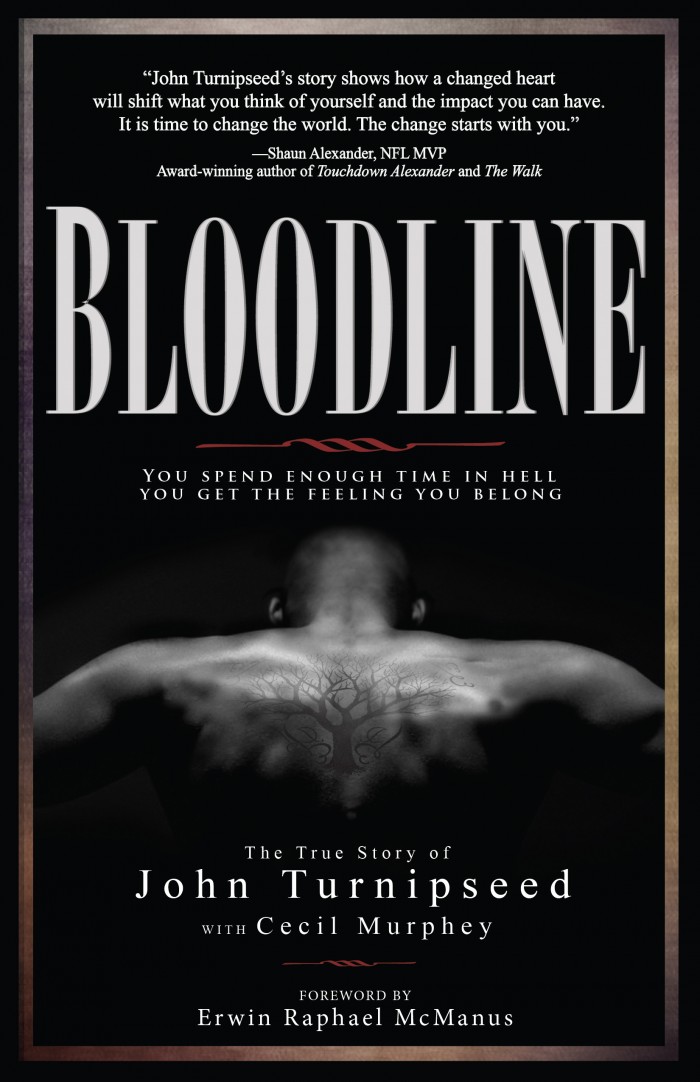 Order the book from these online retailers:

Torn from an idyllic life with a loving, extended family in 1960’s Alabama, young Johnny Turnipseed found himself in Minneapolis, Minnesota with a father he no longer recognized – and empty cupboards. A.C. Turnipseed’s alcoholism and womanizing started a chain reaction of poverty, violence, addiction and despair that nearly destroyed three generations.

From lost and frightened little boy – to gang leader, drug dealer and pimp – to one of the nation’s most respected pioneers of community restoration, John Turnipseed’s story of transformation and restoration is told with unflinching honesty – and contagious hope.

Order Bloodline from these online retailers:

John Turnipseed is a former gang leader, pimp and drug dealer, who spent his childhood battling demons brought on by a volatile, abusive father.

In a 20-year journey, John Turnipseed has transformed into a community leader, pastor, speaker, and serves as the Director of The Center for Fathering and Vice President of Urban Ventures, a 21-year-old non-profit set in the heart of the same Minneapolis gang territory that John and his family terrorized.

John’s life-changing turnaround fueled his passion for rebuilding relationships between fathers and their families. John and the Center for Fathering team have now developed programs that reach over 600 men and 200 women a year.

His story powerfully demonstrates how faith, hope, and forgiveness backed up by persevering mentors and role models are essential for real and relevant transformation. It also encourages us all to never give up on people. John’s “redemption” and work at The Center for Fathering are highlighted in a Fox News update by the same investigative reporter who once helped police capture him.
John’s story was selected as the first “Everyday Hero” segment by Twin City Television and was nominated by Amicus, a mentoring program for prisoners. John’s life is highlighted in the film Turnipseed (www.turnipseedfilm.com) which is used in classes at the American University through the Department of Justice.

“When I was a police officer with the Minneapolis Police Department, I knew John Turnipseed during his life of crime. He remembers that I arrested him once. Decades later, Turnipseed has expressed gratitude to all law enforcement officers for holding him accountable for his actions. He values the consequences he received. “I now serve as Sheriff of Hennepin County and my agency operates the largest jail in Minnesota. I reached out to Turnipseed to create a class that teaches life skills for inmates in the jail. The inmates respect Turnipseed and embrace his message because he speaks with raw honesty about his darkest days and his path toward positive change. People who are incarcerated—and anyone who has faced tremendous challenges—will be inspired by Turnipseed’s life story. He turned away from bad choices and a troubled past and found a way to make his struggle meaningful so that others can transform their lives as he has.”

“This is a powerful story that graphically illustrates the effect on young people,and especially young men, of the absence of a father in a household. Too many of our young people have no father figure and the results are disastrous! We know the absolute importance of a caring adult in every child’s life. Young men with no father figure in their lives are at great risk in the world. They must have an adult to model themselves on and who provides guidance in their lives. We at America’s Promise Alliance are working to help young people graduate from high school, ready to take the next step to prepare them for the work force. We stress the importance of that caring adult in a young person’s life. Someone who cares; someone to listen; someone who has faith in you. It gives the individual a strength to overcome the in equities that life brings. It is the key to success.”

“John Turnipseed’s story shows how a changed heart will shift what you think of yourself and the impact you can have. I thank God for you, John Turnipseed, for sharing your story, for allowing Jesus to change your heart, and for you deciding to love and lead others to be the best they can be. I’m calling all the John Turnip-seed-types forward. Let the shifting begin. It is time to change the world, your state, your city, your community, your hood, your street, your family, and your life. But it starts with you. Go all in and finish the race. We all need you.”

“Based on his tragic, troubled background, it’s a miracle John Turnipseed is where he is today. His story is a clear example of the power of fathers—the chaos that happens when they drop the ball, the blessing that comes when they do what’s right, and most of all, the healing found in the arms of the heavenly Father. You will be inspired by John’s story: his courage to rise above his circumstances, his teachable spirit, and his ultimate surrender to a God who is greater than all the troubles and shortcomings in our lives.”

“I am drawn to stories of people overcoming adversity. Stories of the human spirit rising above and conquering over the struggles, hardships, and downright hell and we all encounter at some point during our life’s journey. This is what attracted me to John’s story and the reason I wanted to play his part in the Turnipseed movies. Hearing, reading, and seeing these types of stories motivate me to keep fighting and to keep the faith when I go through struggles. If you are at all like me, then just one chapter of John’s life will do the same for you.”

“It is far easier to lock up and put away criminal offenders than to understand the root causes of their behavior and offer them a path of redemption. In this enormously relevant and personal story, John Turnipseed openly utilizes his own historic, egregious behavior to guide the reader to those root causes and then offers that redemptive path. Bloodline offers great hope for transformation of our prisons.”

Order Bloodline from these online retailers: